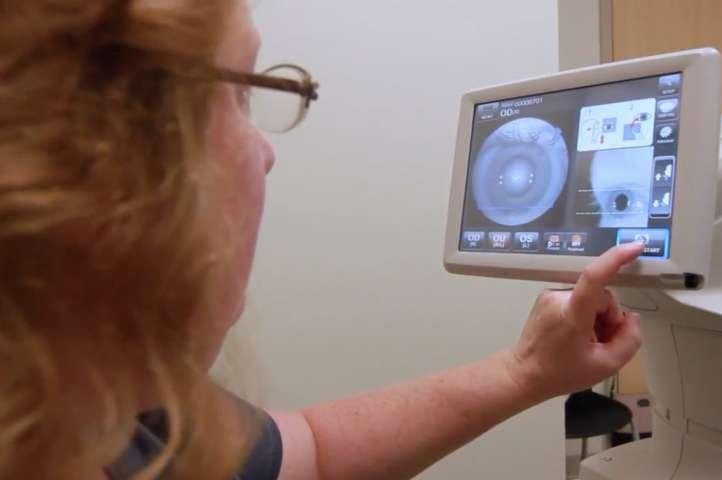 A clinic staff member at the University of Iowa Health Care-Iowa River Landing in Coralville uses the IDx-DR, the first medical device that uses artificial intelligence for the autonomous detection of diabetic retinopathy. Photo courtesy of University of Iowa Health Care
Aug. 28 (UPI) — Researchers have developed a system that uses artificial intelligence to successfully detect diabetic retinopathy, according to a clinical trial in primary care offices.The trial compared the performance of IDx-DR to the gold standard diagnostic for diabetic retinopathy, which is the leading cause of vision loss in adults. The study, which was published Tuesday in the journal Nature Digital Medicine, followed authorization by the U.S. Food and Drug Administration in April.

“The AI system’s primary role is to identify those people with diabetes who are likely to have diabetic retinopathy that requires further evaluation by an eye-care provider,” principal investigator Dr. Michael Abràmoff said in a press release. “The study results demonstrate the safety of autonomous AI systems to bring specialty-level diagnostics to a primary care setting, with the potential to increase access and lower cost.”

He is founder and president of IDx, which created the IDx-DR system and funded the study.

More than 24,000 people lose their sight to diabetic retinopathy each year in the United States from severe complications of diabetes. Diabetes affects the blood vessels in the retina, causing them to leak and distort vision.

Researchers recruited 900 adult patients with diabetes and history of diabetic retinopathy at 10 primary care sites in the United States last year. Complete diagnostic data were available for 819 participants, with a median age of 59.

AI assisted the operator in getting good-quality retinal images using a robotic camera.

After four images were obtained, the AI system then made a clinical diagnosis in 20 seconds.

Like expert clinicians, the AI detects the lesions characteristic for diabetic retinopathy, including microaneurysms, hemorrhages and lipoprotein exudates.

“This was much more than just a study testing an algorithm on an image,” Abramoff said. “We wanted to test it in the places where it will be used, by the people who will use it, and we compared it to the highest standard in the world.”

Camera operators in the study were not physicians or trained photographers.

Of the 852 participants who had an FPRC diagnosis, 819 had an AI system diagnostic output for a 96 percent imageability rate.

In June, providers at the Diabetes and Endocrinology Center at UI Health Care-Iowa River Landing in Coralville, Iowa, were the first to screen patients with the system after FDA clearance.

“We are hoping to do this also for early detection of diseases like glaucoma and macular degeneration,” Abramoff said. “We are working on those algorithms already. The goal is to get these specialty diagnostics into primary care and retail, which is where the patients are.”